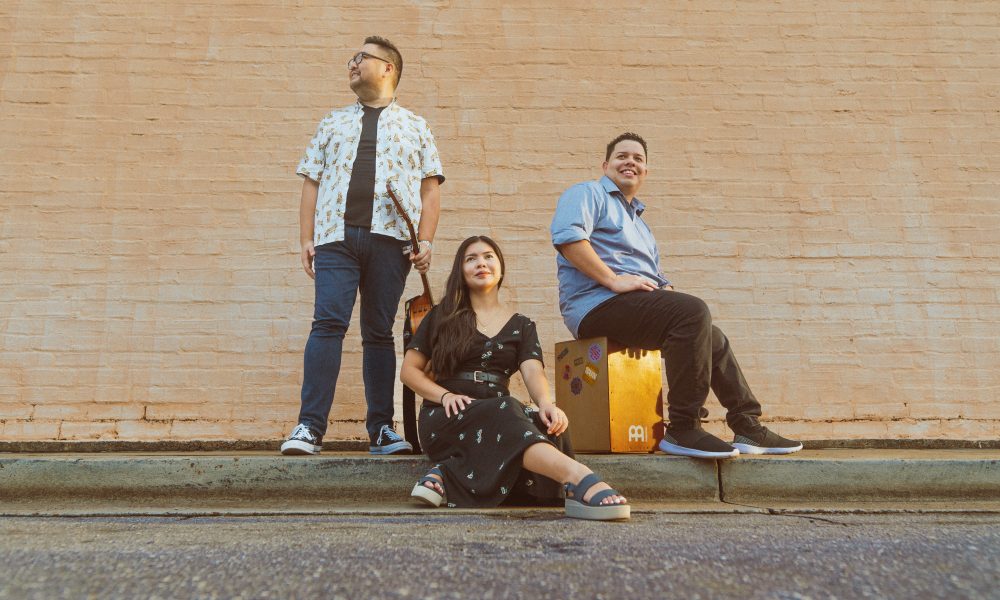 Today we’d like to introduce you to Minutes & Seconds. Them and their team share their story with us below:

BJ Orbase is an avid collector of bright ideas. He credits his parents for that. Maybe that’s why they were songwriters in the Philippines. His dad was never without a tape recorder. Whenever inspiration struck, he was ready to commit his hummings to tape. He’d then pass these on to his wife, who would add lyrics from poems she’d written. They wrote a hit song for his dad before BJ was born. They wrote praise songs for the church. They were a creative partnership: he was the melody, and she was the words.

So when BJ learned guitar and music from his dad, he also inherited his creative spirit. When he eventually started writing songs, he also had a tape recorder and would record not just melodies but words as well. He’d write church praise songs, sappy emo songs, and nerdy folk-rock numbers. Anything that interested him, if he could turn it into a song, into the recorder it went.

When he moved to Orlando in 2016, BJ had songs and ideas but needed friends. So he sought out fellow musicians and creatives through meetups, songwriter workshops, and open mics. During these meetups, he’d show them his songs. These new friends eventually got him solo spots at places around the city, like Orlando Brewing.

BJ had heard that his wife’s co-workers, Kenny and Shayne, were pretty musical. But he had no idea just how much. More often than not, Kenny Crespo carried a Cajon and a pair of bongos with him in his car. His passion and knack for percussion were pretty new, though he had four generations’ worth of music in him. His grandfather, dad, aunts, uncles, and cousins played guitar and performed folkloric Puerto Rican music. Kenny tried his hand at different instruments through the years—viola, piano, guitar but didn’t take to any of them. His dad tried to teach him as he was growing up, but because he worked full-time, he couldn’t commit to teaching.

It was only when Kenny was 24 that something stuck. A friend of his dad’s mentored and taught him how to play Latin percussion. Kenny devoured those lessons and discovered he had a knack for playing Cajon, congas, and bongos. His dad was delighted, and soon, father and son played in church together.

Kenny credits himself as the one who “discovered” Shayne. One Saturday, while they were both working, Shayne was idly singing an Adele song as she was doing some mundane office task. Kenny heard her and was instantly impressed; she wasn’t even trying.

Kenny didn’t know that Shayne Leyco had been singing for over a decade. She had been singing since pre-school and got her first singing lesson at six. Her dad, a musician in the Philippines, scoured his connections to ensure his daughter got the best vocal teachers through grade school and high school. One of her voice teachers was so impressed by her singing that Shayne got four years of lessons for free. Shayne sang for choirs and mall shows, and when she moved to Orlando in 2016, she joined her church’s worship team. Wherever she went, she took her voice with her.

In March 2019, BJ invited Kenny to attend one of his Orlando Brewing gigs. Kenny, ever the go-getter, had another idea: he would play percussion with him instead. BJ was grateful to have someone to share the stage with. His new partner had great rhythm, was easy to get along with, and was up for any song or musical challenge BJ threw down. (To this day, Kenny’s hands tire drastically at the end of some gigs because of the solos BJ asks him to do). Later that year, BJ invited Shayne to sing at an open mic. He had heard her sing a few times before and offered to accompany her on guitar. He asked her to do a song he had written called “Guilty Sort of Love.” The song, about someone stuck in a terrible relationship, called for a voice that would not only soar but also carry a heavy weight. Shayne nailed it. Not only that, she had that same creative spirit that was up for any musical challenge. The same kind of quality that made Kenny and BJ work so well together, so when BJ and Kenny got asked to play at Orlando Brewing again in October 2019, they both decided to turn their duo into a trio.

We consider that first gig at Orlando Brewing as the start of Minutes & Seconds. Our story isn’t just about how BJ, Kenny, and Shayne found they played well together. Our story is that of our parents paving the way for us, investing in, and believing in us. It’s of the good people in the Orlando music community who give us a shot and let us take their stages, of the friends who come out to our shows, learn our songs, and cheer us on. Every chance we get to play music is our chance to thank these people and do right by them; we’re the product and the sum of the love of so many people, and we want to multiply that as much as possible.

We all face challenges, but looking back, would you describe it as a relatively smooth road?
The first two years of COVID were hard, then more complex. We had only been a band for a few months, hopeful we could do more gigs or even record songs. Then the world shut down, and we all had to hunker down and isolate ourselves. Miraculously, we could make the most of it, and when we felt it was safe, we could meet and make music again. We had a weekly Livestream. We were even able to release our first single and a Christmas song; we met radio host JoJo O’Neal and performed for her over Zoom; we were part of the wedding band at Kenny’s wedding. We even did a fund-raiser for typhoon victims in the Philippines. Still, time has always been our greatest struggle, which is fitting that our name is Minutes & Seconds. With the world back up and running, renewed energy, and more opportunities to play, we still need to find the time. We all have full-time jobs or are going to school. Some of us are married and trying to start families. But we persist, and despite the obstacles, we still try to make time for the band. And because we’re making time, we’re making magic.

Appreciate you sharing that. What else should we know about what you do?
We love performing live in and around Orlando. We’ve played intimate open mics and massive productions like the Filipino Freedom Fest at East End Market. We consider ourselves acoustic pop with Latin rhythms. We don’t play loud, but we have a big sound. Our prized assets, however, are the songs we write. We write and sing songs about love in all facets, about love being more than sentiment, especially during mundane times. About how when you love someone, you don’t keep score. BJ wrote “Ornaments” for his wife, who collects Christmas ornaments wherever she travels. We wrote a song for Kenny to propose to his wife. We write songs about mental health. About being insecure and having impostor syndrome. About our minds being reasonable to us, except when they’re not. About our never-ending to-do lists and how we wish we could throw them away. We know that whatever we’re interested in or fancy, we can write a good song about it. After a visit to a Central Florida spring, we wrote a song about wishing we grew up near one. We have a song about the butterfly effect of choosing to hope during times of chaos. And last and most significant, we’re proudest of our latest single, “All the Polite Words,” out now on all streaming platforms. It’s a song about someone being free from a narcissistic relationship, and we wrote it during the start of the pandemic. This is the first song we’re releasing where Shayne sings front and center. It’s stunning. We can’t wait for everyone to hear it.

Can you talk to us about happiness and what makes you happy?
It’s a special occasion whenever we get together to make music. We have so much fun on stage, singing our songs or surprising each other with some spontaneous riff or line. Even when we’re not playing live or rehearsing, we’re just geeking out about some new song we heard or dreaming up plans for the band. We are each other’s cheerleaders. We’re constantly reminded of how lucky we are to play music and that we get to do it together.

The band has also allowed us to meet many amazing people in Orlando who are warm, creative, and inspiring. We meet them after shows or in the booths at festivals we play at. We meet them on Instagram, collaborate with them entirely online, and then meet them in person months later. We love making new friends. They fill us with new ideas and constant motivation to keep going. 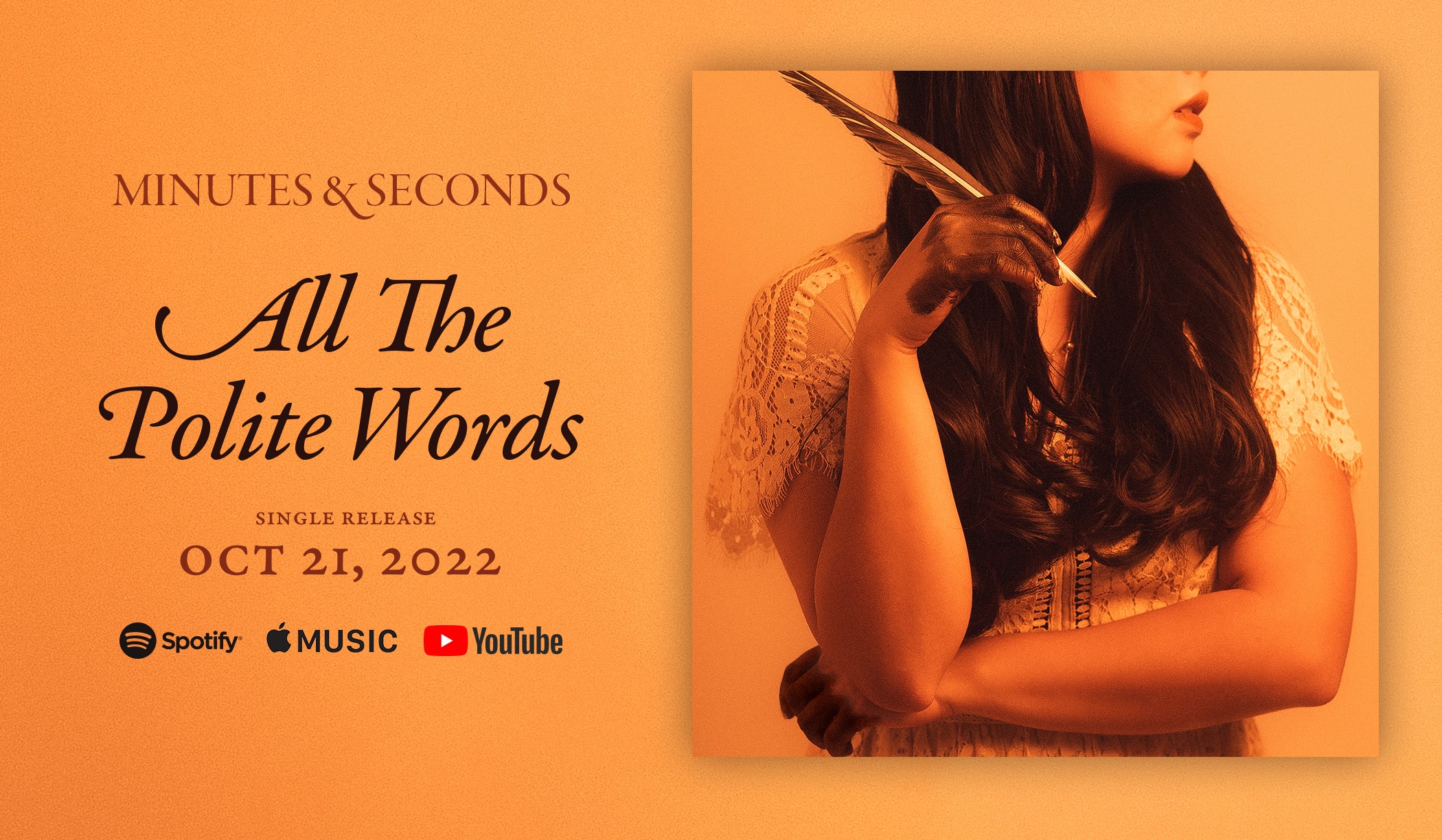 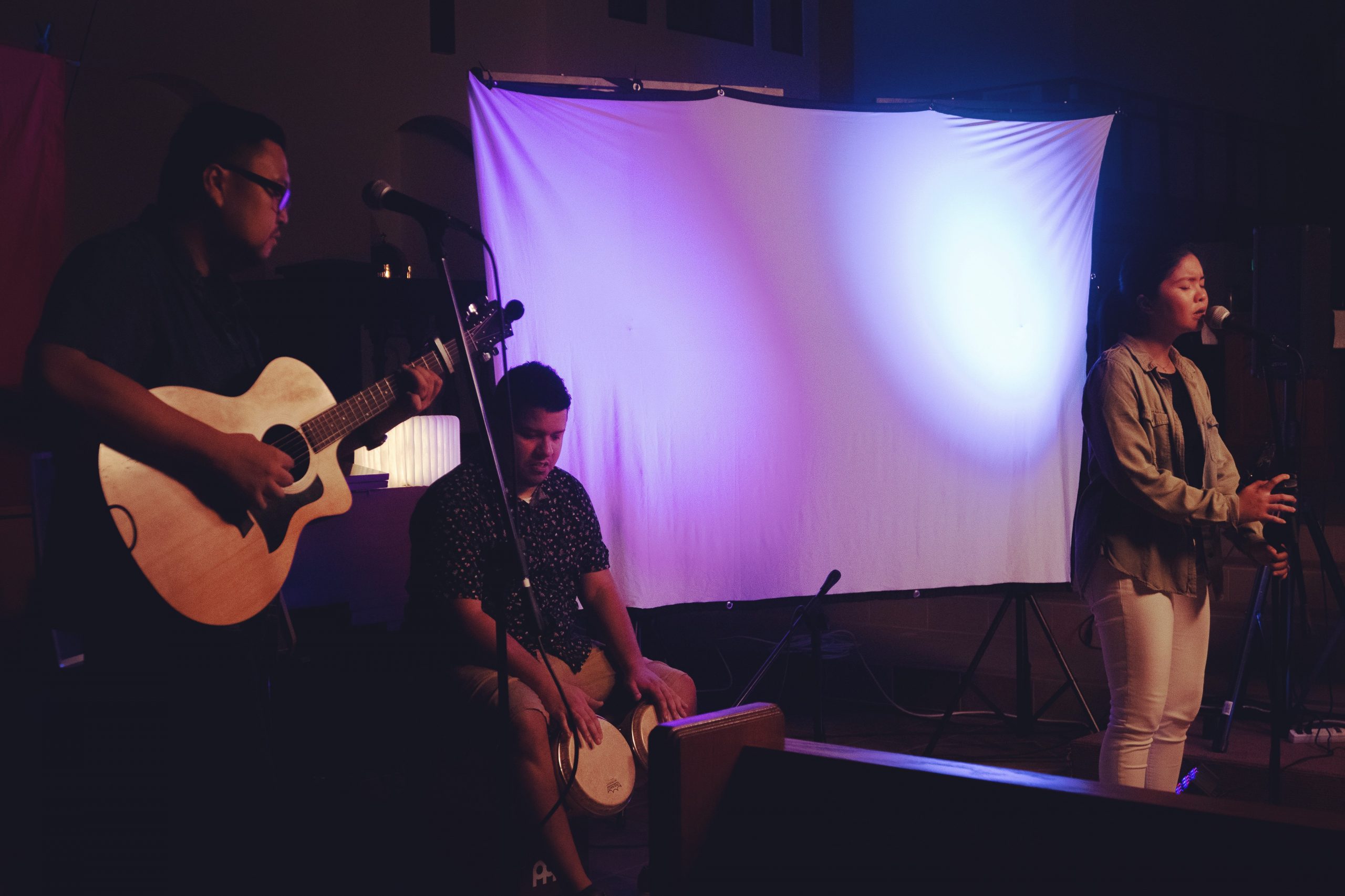 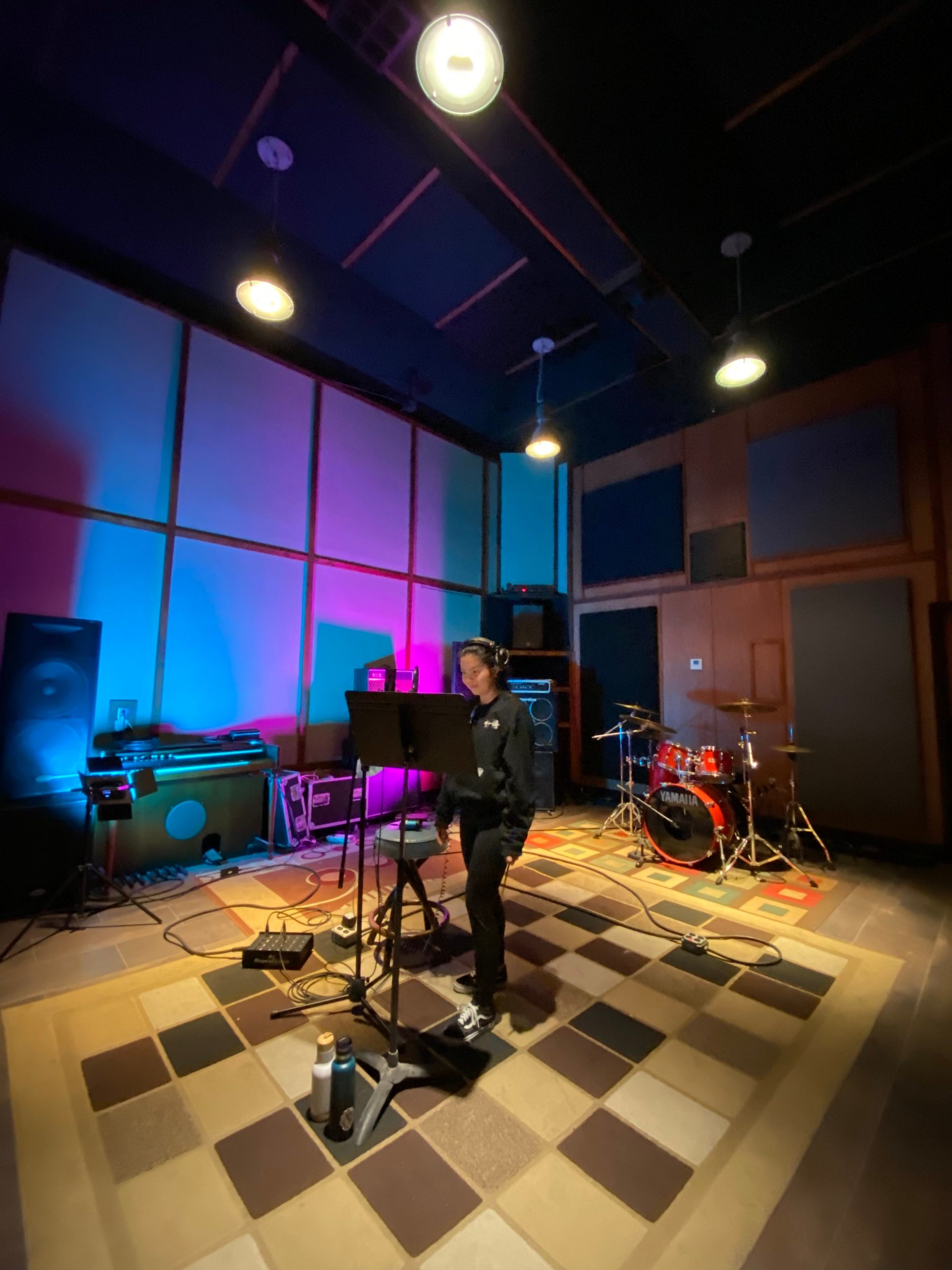 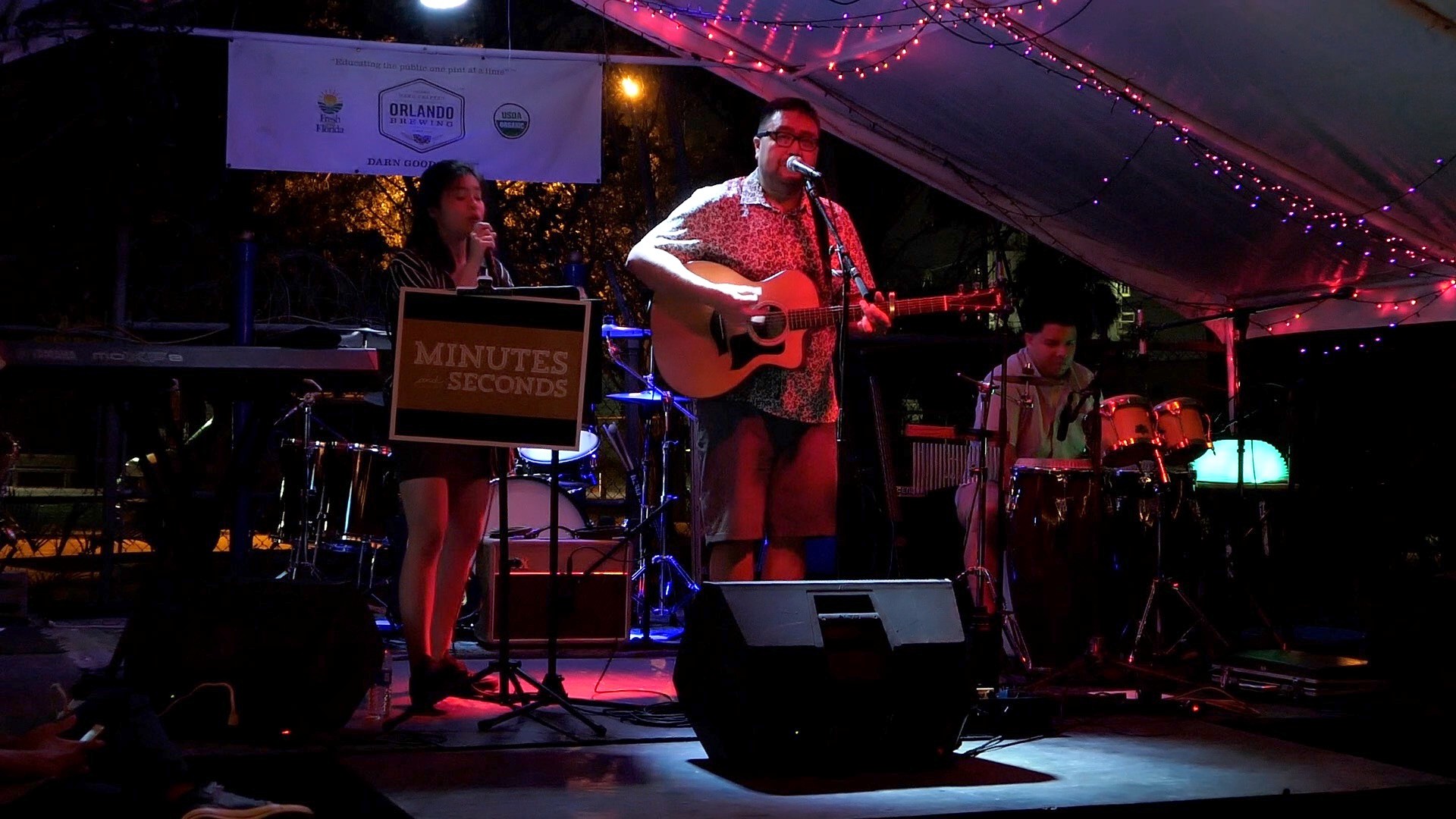 Image Credits
First photo and “All the Polite Words” cover art by Jace Caparas | Instagram @jvceoner All other photos by Minutes & Seconds.